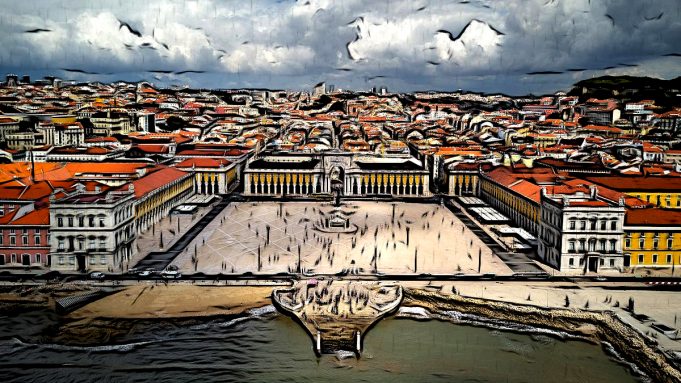 Baixa is the most central and renowned neighborhood in Lisbon. It comprises of magnificent plazas, wide avenues and grand Pombaline architecture. The district is popular with tourists as it hosts the capital’s most emblematic squares and bazaars. Baixa was completely rebuilt after the Great Earthquake of 1755. The buildings of the city were constructed in a magnificent neoclassical style (referred to Pombaline architecture) but more importantly, incorporated the earliest examples of earthquake-resistant architecture. This was Europe’s first great example of neoclassical design and urban planning, and one of the finest European architectural achievements of the age.

At the end of the Avenida da Liberdade is the Praça Dos Restauradores, and this plaza commemorates the independence of Portugal from the 60 years of Spanish rule in 1640. In the center of the square is a large obelisk dedicated to the independence.

Next to Restauradores Square is Rossio Square (Plaça do Rossio), otherwise called Pedro IV Square, which dates back to the thirteenth century. Rossio is considered as the heart of Lisbon, and is a favorite with tourists and locals alike. There are wavy pattern stone cobbles, grand statues and fountains, relaxed cafes and bars where you can try Ginjinha at the buzzy plaza.

Near Plaça do Rossio is Praça da Figueira. This stunning square has classical buildings and an equestrian statue of King John I. Connected to the Plaza is Rua Augusta, an elegant pedestrian avenue. If you take this street and cross the Baroque Triumphal Arch, it leads you to Praça do Comércio, an astonishing square, which in our opinion is the most dazzling in the city and once housed the Royal Palace.

The Rua Augusta is one of Baixa’s prominent avenues and is lined with elegant buildings and tourist-focused shops and restaurants. Partway down the Rua Augusta is the Elevador de Santa Justa, an industrial age lift, that transports passengers up 45 meters to the Largo do Carmo. It’s still a useful means of transportation. The Largo do Carmo is a delightful and peaceful plaza, which is overlooked by the ruins of the Convento do Carmo, a lasting memorial to the 1755 earthquake.

The best viewpoint in the Baixa district is the wonderful view from the top of the Arco da Rua Augusta. This magnificent arch connects the Rua Augusta Street with the Praça do Comércio. From the vantage point of the arch, there are panoramic views across the plaza, the Tejo Estuary, the Rua Augusta, and up to the castle.

There is a pleasant riverside walk, known as the Ribeira das Naus, which follows the banks of the Tejo Estuary west to the Cais do Sodre district. The path ends at the Jardim de Roque Gameiro, and this is next to the Cais do Sodre train/metro station, where the metro can take you back to your accommodation.

Why Is Baxia Worth to Visit?

Aside from its excessive range of shops and restaurants, The Baixa district is at the center of Lisbon, and from the district, it is easy to travel to almost every other area of the city. The train to Sintra departs from Rossio station, while the tram to Belem departs from Praça do Comércio and there are good connections to the airport passes through Rossio square.

The street Rua das Portas de Santo Antão is a very popular dining area with many great, touristy restaurants that stay open late into the night. However, the nightlife of Baixa is primarily focused around late meals, casual drinking, or performances in the theatres. Baixa is a good location for family evening meals and does not have a rowdy or chaotic atmosphere, as with some other districts. A trendy hang out is the Rooftop Bar at the Hotel Mundial.