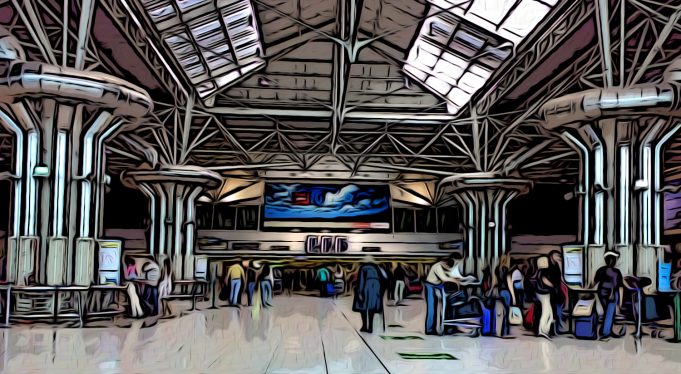 One of the best qualities of Lisbon Airport is its proximity to the city center. It is nearly ten-kilo meters away from the center and it makes the transportation from the airport fairly easy. Apart from its location, the options it offers for transportation also makes the airport a loved one among others of the European capitals.

How to go from Lisbon airport to the city center

How to Go from Lisbon airport to Downtown

The airport is located very close to the city center in Lisbon, it is only 7 kilometers away. The airport is connected to the city with great public transport channels, so getting to the city is fast and convenient.  It is also worth noting that all these alternatives are among the cheapest compared to other cities in Europe. Below are the best options available to go from Lisbon airport to downtown.

The Lisbon Humberto Delgado Airport (LIS), also known as Aeroporto da Portela by locals, is the main airport in Portugal.

The Lisbon Humberto Delgado Airport (LIS), also known as Aeroporto da Portela by locals, is the main airport in Portugal.  It is also one of the key airports in southern Europe. There are frequent connections to the main European capitals, which situates it as a hub for international destinations such as Brazil, and certain destinations in Africa.

The airport has two terminals: T1 and T2.  T1 is the main terminal and the T2, which is smaller, is mainly used by low-cost airlines.  The two terminals are connected with each other by a complimentary shuttle bus.

How to Go from Lisbon Airport to the City Center

Lisbon airport offers the advantage of being connected to downtown via subway.  This rids the travelers from traffic problems, saves them time and money. Having said that, there are multiple available routes to go from the airport to the city center.  Below is a comprehensive list of the most used routes;

Subway is the cheapest way to go from Lisbon airport to the city center.

A rechargeable electronic card, Viva Viagem, first needs to be purchased from the ticket machines in the metro stations for 0,50 Euro in order to travel in the city’s subway and bus network.

Subway is the cheapest way to go from Lisbon airport to the city center.

A one-way trip to the city will then cost only 1.50 Euros on the Viva Viagem card.

The airport subway station is linked to only one terminal and that is T1.  In case your arrival is at terminal T2, then there is a free shuttle bus that connects the two terminals. It is approximately a 10-minute ride.

The subway station is part of the Red Line. The Red Line connects with the Blue, Yellow, and Green Lines as detailed below in the “Connection Stops”.

Depending on where your accommodation is located, you may need to switch lines.

If you are staying near;

You may find more information on the Lisbon metro line and its details on; https://www.metrolisboa.pt/en/

2. Aerobus is a Convenient Option to Go from Lisbon Airport to Downtown

The Aerobus connects Lisbon Airport to a number of downtown neighborhoods.  It takes you to Baixa / Chiado in 20 minutes.

The Aerobus connects Lisbon Airport to a number of downtown neighborhoods.  It takes you to Baixa / Chiado in 20 minutes.

If your final destination is Rossio or Baixa / Chiado neighborhoods, then this is a very convenient option.  Unlike the subway, you don’t have to change vehicles to get to these areas. You also get to avoid the rush hour crowd in the subway and the subway ticket vending machines.

The Aerobus passes through both terminals, T1 and T2.  So, if your plane arrives at T2, this is a convenient option to go from Lisbon airport to downtown. This service has two lines:

* Line 1: Passes every 20 minutes; it goes to the city center stopping at Marqués de Pombal, Avenida da Liberdade, Rossio and ending at Cais do Sodré.

* Line 2: Passes every 40 minutes; it goes to the financial center of the city.

Journey Duration: 20 minutes to Rossio and Praça do Comércio

You can check more information and buy your ticket online here: https://www.aerobus.pt/

3. Bus Lines : Only Viable If You Cannot Reach Your Destination by Subway or Aerobus

The below bus lines pass by the airport:

If your hotel is located in the central areas of Lisbon, the bus is not a convenient option to make it to downtown Lisbon however.  These lines have long lists of stops. In addition, it should be noted that they only allow hand luggage (50x40x20 cm in size).

You can check the detailed bus routes by the below link: http://carris.transporteslisboa.pt/

If you arrive at the Lisbon Airport at night, unfortunately, neither the subway nor the Aerobus runs.  Your option then is to hop on the # 208-night bus. This line has several stops in the center such as the Cais do Sodré station, the Praça do Comércio, and Praça da Figueira, right next to Rossio.

Important Stops: It has numerous stops. Among the most prominent Cais do Sodré, Praça do Comércio, Praça da Figueira or Alameda.

Find out about the stops and the schedule for Bus Line # 208:  http://carris.transporteslisboa.pt/

Unlike most European capitals, Lisbon Airport is rather close to the city through a car ride.  It is a very comfortable option to take a taxi from Lisbon Airport to the city center or wherever your accommodation may be.  You have taxi stands in both T1 and T2 terminals.

It is a very comfortable option to take a taxi from Lisbon Airport to the city center or wherever your accommodation may be.

It is, however, the most expensive option with somewhere between 15-25 Euro, assuming your destination is downtown.

What is even more convenient than a taxi ride?  Drivers holding a sign with your name right inside the airport, only to escort you to your private ride, which will then take you to wherever your final destination may be.

The prices of private transfer have been falling, making them an attractive alternative to taxi rides.  This service is particularly interesting when traveling in a group; it is common to reserve minivans. The predefined prices help avoid detours or negotiations that could be encountered in taxi rides.

If you are only planning on staying in and around Lisbon, then perhaps renting a car is not your cup of tea.  The airport is conveniently connected to public transport and to parking. However, if you are going to visit other places in Portugal, then this can be an interesting option.

All the larger international car rental firms are present at the airport. In the arrivals terminal, you have several options.

8. Uber: Yet Another Alternative to the Taxi

Let’s face it, the taxis are losing their ground with Uber being so accessible.  At the airport, there is a designated pick-up area for Uber. It is almost always more affordable than a taxi ride. To give you an idea, the journey from the Lisbon Airport to the city center (eg. Rossio) may cost between 13 – 18 Euros.

This may be the most convenient option, even over the taxi, when you arrive late at night and neither the Aerobus nor the subway works anymore.

This may be the most convenient option, even over the taxi, when you arrive late at night and neither the Aerobus nor the subway works anymore. Also when your accommodation is in less well-connected neighborhoods from the airport such as Alfama or in the suburbs.