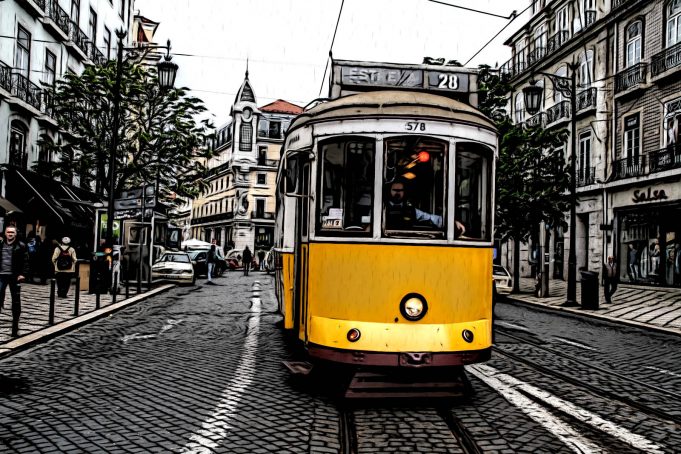 Tram 28 is a very old and famous tram in Lisbon. Tourists in Lisbon are quite attracted to this type of transportation. Locals also use the tram for daily purposes. Let’s now look at the details of this specific tram.

Unlike most cities, Lisbon is insistent on keeping its historical trams. Today, they are quite popular and admired by many visitors. Out of five Lisbon tram lines, four of them provide old tram models. Tram 28 is also among the old ones.

Tourist trams are also available along with normal public trams like Tram 28. The color of the tourist trams is red. They follow almost the same route as Tram 28. The difference is that the price of these trams are higher, and there is spoken guidance.

If you want to learn more information about Lisbon trams, it is advisable to check the Lisbon public transport website.

Its history dates back to the beginning of the 20th century. Back then, there were old horse-drawn carriages in Portugal. They were the main means of transportation. Then in the year 1914, the tram system was imported from the United States by the company Carris. It is a company that operates trams and buses in Lisbon. In 1901, the company first began to use electric trams. Then, they built some other trams between the years 1936-1947 and some others between 1995-1996.

In time, the route of Tram 28 has changed. At first, the stops started from Praça Camões and ended at Estrela. Today, it starts at Largo do Martim Moniz, and ends in Largo dos Prazeres.

Although it is public transportation aimed at regular locals, tourists are quite attracted to this type of tram. In this way, tourists can also see the great regions of Lisbon.

Tram 28 in Lisbon is basically a yellow electric carriage. Its floors are preserved with wooden floors, and its window frames are timber.

Because it is an old tram, it can be used within the narrow hills of Lisbon. As opposed to this, modern trams cannot function on most routes. Luckily, like Tram 28, most Lisbon trams are Remodelado trams, which are vintage.

You should also note that the tickets are quite affordable. Yet, you can save more money by using a Viva Viagem card or a Lisbon tourist pass. You can find Viva Viagem cards at Metro and suburban train stations. They are also available on ferries, and at PayShop locations.

Because it is a very popular tram, expect to stand only around the standing room. You should also note that you may not even find any standing room during rush hours and tourist seasons.

Tram 28 passes through many historical places during the journey. Let’s now look at some of the attractions on the route.

Attractions on the Route

The tram starts at the Praça Martim Moniz. Sometimes, the line may be long, but you will get used to it. In the end, you will be able to see great monuments and unique streets during your trip. Also, all of this costs only a few coins!

The next stop is Voz Operário, where the Monastery of São Vicente de Fora is located. The monastery was an important foundation in medieval Portugal. It has a Romanesque style, and it houses the royal pantheon. The style of the façade of the building belongs to Mannerism, a Renaissance style. It also offers a view of the National Pantheon dome behind it. 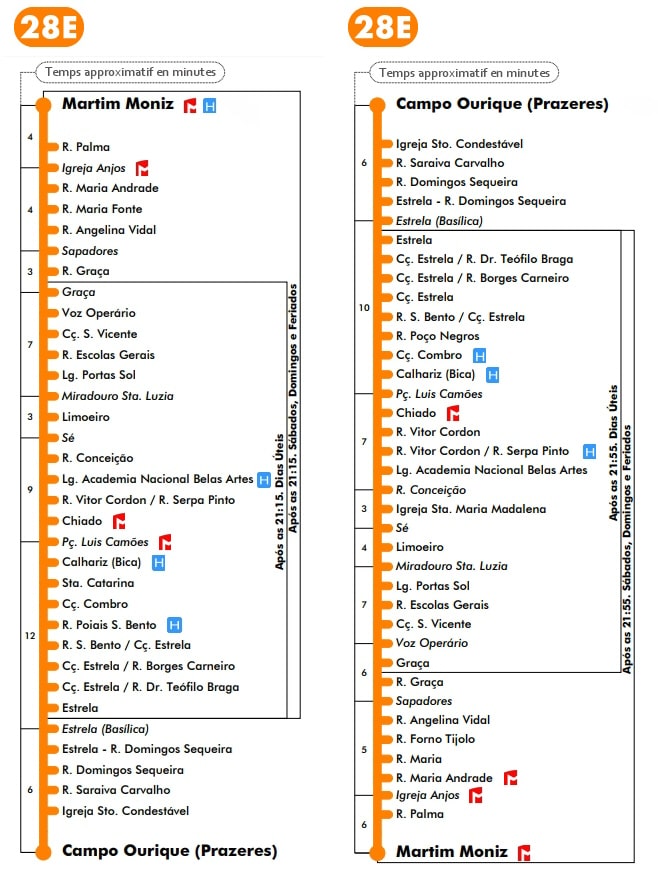 Portas do Sol is another stop. It has a great view, and sees the old town of Alfama. There you can see the domes of São Miguel, Santo Estêvão, and São Vicente de Fora churches.

Sé is another stop where there is The Lisbon Cathedral. It dates back to the times of the Portuguese Age of Discovery.  This Gothic Cathedral has survived many earthquakes through the centuries, despite some parts of it being destroyed. Later built in a Baroque style, it still maintains its magnificence.

Conceição. It is a downtown area which has a square. Here you will find Terreiro do Paço or the Palace Yard. You’ll also see great views around this area.

Estrela. You’ll find Basílica da Estrela here, created when the Queen gave birth to a boy. According to the story, Queen Mary promised that she would construct a Basílica if God gives her a boy. Ultimately, she had the building constructed. Sadly enough, her son Jose died two years after. Then, the queen died because of her grief, and her body was put inside the Basílica.

Just the opposite of this Basílica lies the Jardim da Estrela. It is a green area within the city. There are lots of ponds with ducks, birds, and turtle frolic inhabiting. Usually, families and people who wish to do exercise or picnic choose this area.

Campo Ourique. This is the final stop. You will see the Prazeres Cemetery, meaning Cemetery of Pleasure. It takes its name from the neighborhood. The Cemetery indeed offers a calm and delightful environment to rest or stroll. It is also the largest cemetery in Lisbon. It also hosts many well-known Portuguese. Behind the park, you’ll see the view of the Salazar bridge.

Through Tram 28, you will be able to visit many historic parts of Lisbon by going up and down its sharp hills. This includes the district Alfama as well, where you’ll see labyrinths of streets, and the Azulejo houses, and many others we’ve described above. In Bairro Alto, you’ll find lively nightlife. There are many restaurants, bars, and night clubs. Not to mention enjoying the fado music mostly in Alfama and Bairro Alto.

You can find the working hours of the trams below:

During the rush hour (between 7 and 8 a.m.), a new tram comes up every ten minutes. At other times, they run every 15 minutes. Sometimes, Lisbon trams break down, so the timetable may change at those times.

It normally takes around 48 minutes from the first stop to the last, depending on the traffic.

What is the alternative to Tram 28 in Lisbon?

The 12E tram can be a good alternative to Tram 28. It passes through most of the same stops as Tram 28. They include the stops at São Jorge Castle, Miradouro de Santa Luzia, the Se Cathedral, and more others.

Another option is the 25E tram to reach Campo Ourique. From there, you can reach the downtown area.

What are the working hours of Tram 28?

It usually runs from around 5.30 a.m. to 10-11 p.m. throughout the week. For more details, check the Working Hours section above. 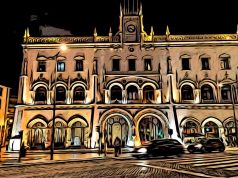