Sintra is a beautiful town only 25 km away from Lisbon. With relatively easy and cheap means of transportation, Sintra is one of the most popular day trip options starting from Lisbon. If the visitors have one extra day to spend, Sintra is ideal with its famous breath-taking landmarks like the Castelo dos Mouros, the Palacio Nacional de Sintra, and the Palacio Nacional da Pena. However, Sintra is quite popular among tourists. So, it is best to avoid the crowds by visiting the town as early as possible, outside the rush hours.

Sintra is only 25 km away to the west of the Portuguese capital and it is very easily arrived by train. There are also bus lines that travel between Sintra and Lisbon, but they are not located in ideal places and it takes longer to arrive in Sintra by bus than by train. Also, it is not recommended to go to Sintra by car. Both because the roads are very curvy and because they are not designed for heavy traffic. During high seasons, there is always traffic jam and very restricted parking spots because of the crowd. Therefore, it is never ideal to drive to Sintra.

If it is preferred to go to Sintra by train, there are two possible options. Both are very handy and take around half an hour.

The Castelo dos Mouros is a castle built between the 8th to 11th centuries by the Moors. The castle was restored in the 19th century while the Palacio Nacional da Pena was being built very nearby. The castle provides its visitors with amazing lookouts and views of its surroundings.

Only 400 meters away from the Castelo dos Mouros, the Palacio Nacional da Pena is one of the most beautiful palaces in Europe according to many. Lively colors of the palace constitute a picturesque beauty side to side with the green of the surrounding forests. The inside of the palace is equally beautiful.

The Palacio Nacional de Sintra is usually the starting point of the Sintra trip since it is at the very center of the town. With its gothic architecture and its medieval authenticity, the palace was used as the royal residence from the 15th century to the 19th century. 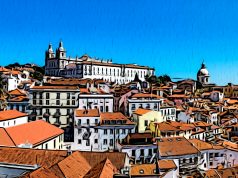 1 Week in Lisbon: A Complete Itinerary 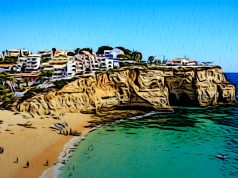 How to Travel from Lisbon to Faro?